As you might have noticed, the blog finally has a header. The photo is of Romina, one of my recent re-roots.

Romy was a Mystery Squad Kenzie doll. I liked her curly hair, being the proud owner of my own set of springy ringlets, but she was missing some hair plugs in the front and along the sides. Also, I couldn't stop wondering how she'd look as a redhead.

(Because, in case it isn't obvious already, I'm a wee bit obsessed with red hair.) 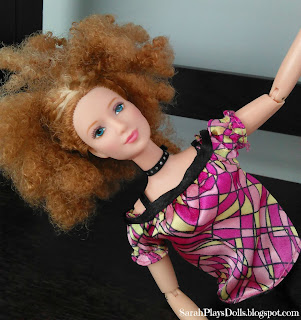 This is her "before" photo, one of the first photos I took with my camera phone. Romy wasn't so sure about my photography skills, having heard stories of my disastrous attempts at shooting regular-sized people, and decided to "help."

"Someone has to keep the camera still, Miss Shakey Hands," she said. 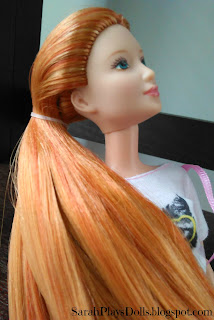 Here she is, after the re-root -- making sure I get her good side. 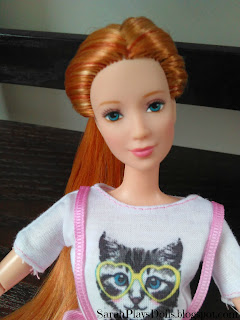 Here she is, "helping" again. "What would you do without me, mom?" I used three different shades of red for her... at least. I love how she turned out, but her re-root was almost a disaster! Her neck knob got stuck inside her head. I tried and tried, but I couldn't get the darn thing out, so I left it where it was and re-rooted around it. This made for some awkward stabbing as I tried to get the needle around the hard piece of plastic.

But it worked! And thankfully, I had a spare knob, so I was able to put her head back on. 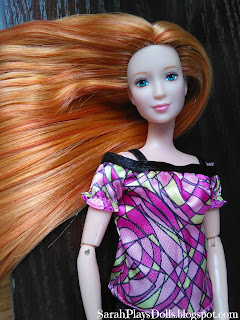 After I set her part with boiling water, I took her hair down. I had a lot of fun experimenting with different lighting and with some of the scrapbook paper I'd hoarded collected over the past year. 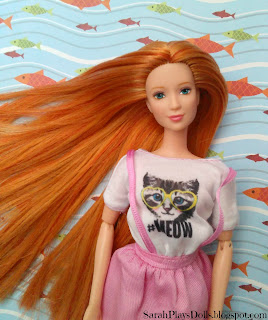 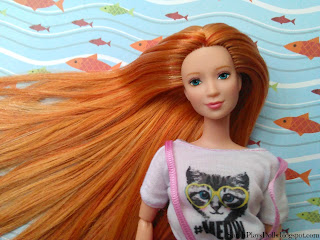 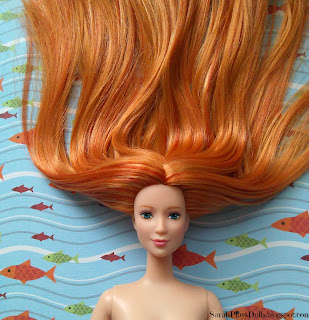 There we go! Much better.

We had a lot of fun with the fish background, and as you'll see in later posts, I kept going with the sun/sea theme. I even did my first photo story, which I can't wait to share with you all.

Until then, Romy wants you to know that she continues to be my photography assistant. She's letting me hold the camera on my own these days, but she oversees props and backgrounds and has a final say in most of the edits. I mentioned earlier that most of my dolls have titles, and Romy is Vice Secretary of Making Photos Suck Less. Her words, not mine!

Follw me with Bloglovin!